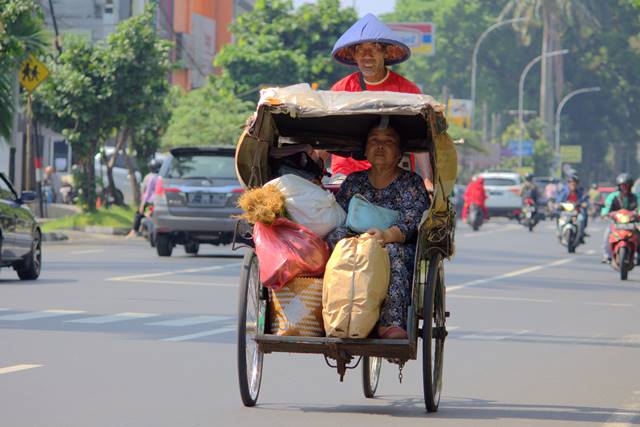 Bringing your camera everywhere will give you a chance to record something that reflexes a life of people.

This photo of Becak, one of old transportation means in Indonesia, actually shows one hidden “big” problem in Indonesia’s society. Foreigners may wonder what is wrong with the three wheeler and even many Indonesians may have the same thought.

The photo was captured few weeks ago on Sudirman Street, one of main road in my hometown, Bogor. From several Becaks, I took some photos. Most of them were intended to train my capability in photography but later, I found that the photo can be utilized to tell the people about how is the living of Indonesian, at least a small fragment of them.

The hidden problem is because in some cities, like Jakarta and Bogor, becak has been “banned” from main roads. They are not allowed to operate and make a pass the road. Yes, there are laws that prohibit them from doing that.

In reality, it is still quite easy to find the three wheeler crawling slowly on many main roads.

This shows that law enforcement are still not effective. A quite common attitude in this still developing country.

I am not against becak drivers who try to earn living. However, they should also live their life following the rules.

Laws, rules, regulations are made to make sure orderliness in a society. The disobedience can create problems and clutter.

The photo is simple, normal, and only one activity of people in my city but behind it, the photo shows what problem Indonesia people are facing. Quite a big problem