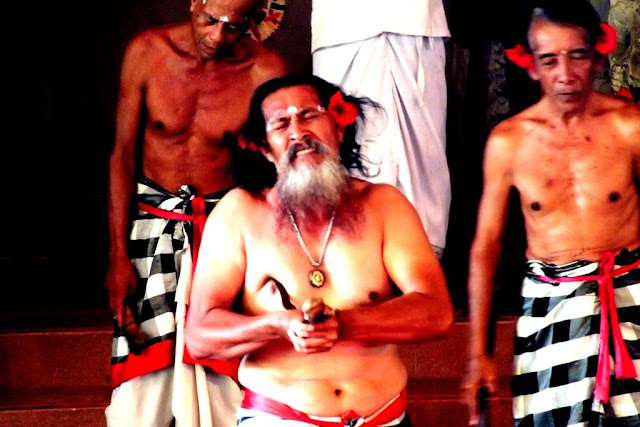 First of all, DON’T DO THIS AT HOME. Do not ever try to do similar thing like shown in the above picture. It is dangerous. You will need a very special training and quite long time.

The above photo, taken in 2016 in Bali, was a picture of a man stabbing himself using a “KERIS’, a traditional curved blade in Java and Bali’s culture. It was not a plastic one but a real one made out from steel. It was a weapon commonly utilized  for war in the past era.

The man in the photo was not so desperate because of his broken heart. I was not sure if he was even already married or not, so the reason was never known until now why he was so dare to pierce himself with such dangerous tool.

The only thing I know was that it was just a part of a show commonly staged in the God Island, Bali. Tourists can find such show in many places around the most favorite tourist destination in Indonesia.

The name of the show was Barong and Keris Dance.

The guy and with his team mate just did a small part actually but it gained most attention of the audience. They just tried to stab themselves many times in front of hundreds of spectators. That’s it. Nothing else they did, they didn’t dance or spoke.

What made the audiences were overwhelmed was because nobody was harmed. There were not even slight wound in the body of the man, and his mates. The Keris never entered their body.

For Indonesian, such as show is quite common. In West Java, you may hear a name of ‘DEBUS’, an attraction with similar idea. However, the show should be very fascinating for foreigners. 9I am not sure if Captain America can do the same because he always avoided bullet or any weapaon, which I assume he was not bullet or weapon proof).

To have the immunity of weapon like the man is not easy. Some says it takes years to train and make a human body like a shield. Some other mentions, the show involves a “magic”.

I am not sure about that. I never practiced this action. I am just a photographer anyway.