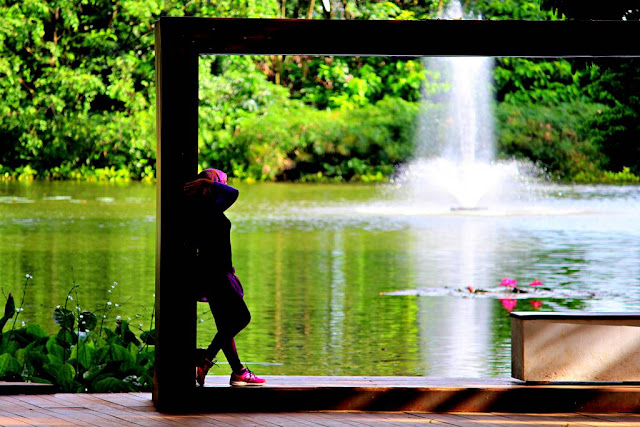 As a street photographer, I rely on my sharp eyes to find objects, or the combination of objects to make a photo. I can not ask anyone to pose just for me, especially because I don’t know them and it won’t be polite to ask strangers, even if I do it in the most polite manner, to stand in front of my camera and allow me to capture their picture.

Well, I knew Eric Kim did it sometomes, but I really don’t have a gut to copy such move during my time on streets. I haven’t reached such level yet.

So, it is safe to say that I am just waiting or looking for available objects that can be captured with or without their permission.

However, sometimes, either I am lucky or unlucky, I met many people who are more than willing to become my objects. Even, without asking whether they are suitable or workable for me, they act like a supermodel in front of my camera.

Like the girl in the picture. Honestly, I just needed her shape to accomplish my idea about “big frame” in Bogor Botanical Gardens, Indonesia. That was why I tried to take a picture quite far away using my longest zoom. It was enough.

Unfortunately, she found me capturing her and eventually, asked me to take more her pictures more than what I was willing to do. But, since, she had helped me realizing my idea, then, as a civilized person, I spared her some shoots, even though finally, I didn’t know how to use the photos. I didn’t know her and she was not pretty either.